All food lovers had been patiently waiting for this glorious celebration of gastronomy for 12 long months and it finally returned to our beautiful Scotland’s capital city, ready to surprise visitors with original, eclectic and especially fresh varieties of local and international products.

The flagship event celebrated its 11th birthday in Edinburgh this year, bringing again hundreds of extraordinary food companies, healthy and organic ingredients, as well as talented chefs, from all around the globe, with a special focus on Scottish food producers and recipes.

About 200 colourful food stalls were presented to a curious and hungry crowd who showed up to sample the incredible selection of unique and independently produced ciders, beers, wines, jams, cheeses, sweets, as well as exotic dishes prepared with love by talented restaurant owners from every corner of the world.

For the most curious tasters there were a wide range of international food options. Indian, Thai, South African, Chinese, Mexican, Greek, Italian, Czech and French cooks warmly welcomed customers to taste their inviting and exclusive dishes. 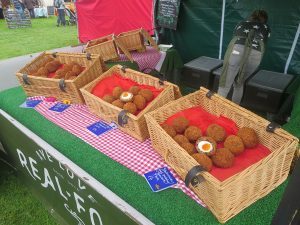 The whole park was dominated by a cheerful ambiance, thanks to the live music played by an amazing rock band on a spacious stage by the entrance, the sun was shining and keeping all visitors satisfied of their culinary journey, children were happily running around on the fresh grass while eating dyi ice creams and outstanding brownies from Whipsmiths and Three Sisters Bake. Everything was perfectly combined with a heavenly scent of spices, grilled meat, bbq, popcorn, chocolate cakes, fresh oysters and coconut milk that filled the air in the buzzling Inverleith park. 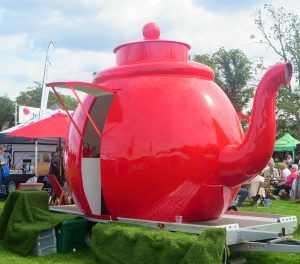 Four massive tents were built as part of this fascinating festival, where many exciting, as well as always crowded cooking and drinks tasting shows, were taking place. The Drinks Theatre, followed by the Chefs Theatre, Childrens Cookery Theatre and the Cake & Bake Theatre, were presenting captivating shows to the gourmet public, held by celebrity cooks and sommeliers every hour during those three days of culinary exploration.

It was impossible not being able to find something delightful to sample from during this captivating festival, since everybody’s taste could be easily satisfied, thanks to the incredible amount of diverse food sold by each of the stalls. Most of them were offering free samples to the most adventurous visitors, giving them, in this way, the opportunity to learn about, taste and potentially purchase their products. 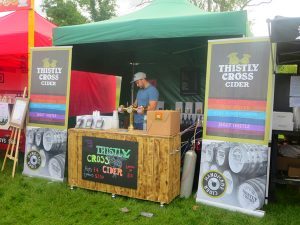 Fascinating was the chance of trying different types of gins, ciders and craft beers, as the ones respectively produced by Pickering’s Gin, Thistly Cross and Stewart Brewing from Edinburgh. UK farms and small food shops were also showcasing their organic ingredients at the festival, providing visitors with unlimited sampling options. Out of this world were the authentic Scotch Eggs made by Ave Love Real Food, which could be chosen between classic, haggis and black pudding flavour.

The amount of street food to try out was unbelievable and definitely one entire day visiting this magnificent festival was not enough. If you haven’t had the opportunity to check the Foodies Festival yet and if you consider yourself as a real food lover, then make sure to buy your ticket in advance next year, you won’t regret it!