Tom and Michaela Kitchin opened their restaurant, The Kitchin on Edinburgh’s Leith waterfront in 2006. The restaurant was awarded a Michelin star in 2007 followed by numerous prestigious awards including ‘Best UK Restaurant’, ‘Best Restaurant in Scotland’ and very recently ‘Best Restaurant Experience’ in 2015.
The Kitchin presents modern British seasonal cuisine influenced by French cooking techniques and an appreciation of the best quality ingredients available from Scotland’s fantastic natural larder.
The restaurant’s philosophy ‘From Nature to Plate’, is a true reflection of Tom’s passion for the finest, freshest Scottish seasonal produce and the cooking at the restaurant reflects Tom’s training under some of the world’s best chefs blended with his own Scottish heritage. 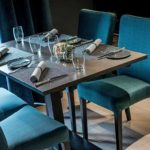