Wedgwood the Restaurant, on Edinburgh’s Royal Mile, has scooped its third accolade in less than two weeks. Paul and Lisa Wedgwood are delighted to have received the SLTN Wine Award and be listed in the Sunday Times Top 100 Restaurants for their “faultless cuisine and service”, as voted for by diners. The hat trick was awarded when they won the Thistle Awards Hospitality Hero 2015. 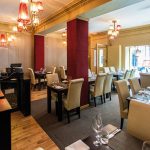