Located on the edge of the Bruntsfield Links is the Golf Tavern. Founded in 1456 the Tavern was previously known as the Golf Hotel. It has served many a golf player, and according to Hamilton is:

“…By far the oldest known golfing pub. Sport was encouraged in the vicinity of the inn – cockfighting, boxing and games of chance – and it was natural that the innkeeper had a role in early Scottish golf…”

During this period in golf’s history purpose-built golf clubhouses did not exist. The local inns provided a place for meetings and social functions. Ye Olde Golf Tavern was used as Bruntsfield Links Society clubhouse from 1788 until early in the nineteenth century when they moved to Musselburgh.

The Bruntsfield Links also had many other uses and were often taken over by horse trade shows, travelling fairs, grazing animals and local people going about their daily business. By the nineteenth century the Links had become so congested that the golf clubs decided to move outside of the city to Musselburgh.

It is a new and exciting chapter in the history of the oldest golf pub in the world. The newly designed decor, friendly staff and excellent service will ensure the pub is still serving pints (and golf clubs!) for another 500 years and beyond.

Bruntsfield Links Golf Course
No account of golf history in Scotland is complete without mention of Bruntsfield Links – golf has been played on the Links from as early as the 1700’s when The Royal Burgess Golfing Society of Edinburgh was founded. Believed by some to be the oldest golf society in the world, this ancient golf club can trace its existence back to 1735 from public recordings made in the Edinburgh Almanac from 1834.

The Bruntsfield Links Society was founded in 1761. This group of golfers along with the Burgess Society shared the use of Bruntsfield Links for many years. Members for these clubs were made up of local merchants who enjoyed playing golf on the course and drinking ale in the nearby Golf Tavern.

Today Bruntsfield Links remains one of Scotland’s few free public golf courses. Looked after by the City Council’s local green keeper it is a beautiful stretch of inner city parkland that also offers a rich and colourful history. Golf clubs and balls can be hired from the Golf Tavern for visitors wishing to have a play on the oldest short-hole golf course in the world and experience this slice of golfing history for themselves. 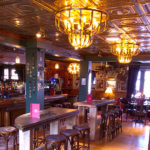